Roadrunner in Her Nest 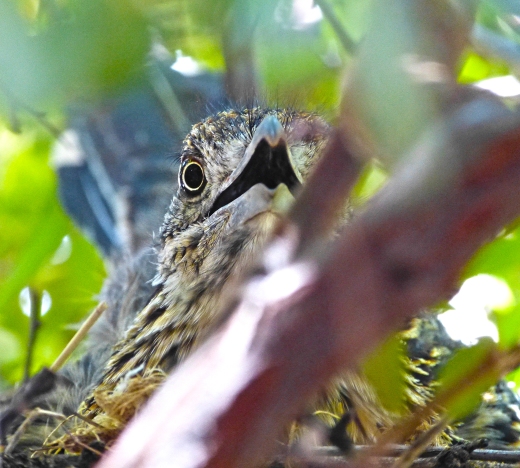 There is a clickable at the top of the site, right under the picture of Dorrie Anne in the woods near Flagstaff that says ANIMALS SPOTTED. That’s where I write about the animals that we see in our backyard, or wherever we happen to be. I haven’t been keeping up with it, because everyday it is pretty much the same thing about the roadrunner nest. Mama is sitting on it, and Pops brings a beak full of goodies now and then. Sometimes it is additional nesting material, and sometimes it looks like a tasty morsel of some sort. There isn’t much in the way of bugs around here, so not sure what they are finding to eat.

Can’t really tell which is the male and which is the female, and we’ve read that they both sit on the nest, so I don’t REALLY know if this is a portrait of Mama Roadrunner or Papa Roadrunner, but they are both “running” their little tails off, having built the nest, presumably produced some eggs, and now sitting quietly in the “confinement” period.

The nest was built within a huge bushy hedge that is at the edge of our deck. It is actually so perfect – I don’t think any of the other resident animals could get in there, not even a cat. There are ringtails and foxes around here, but tempting as the roadrunner eggs would be to them, I don’t think they would be able to get through the thicket to the nest. We can see it from our deck, but from the other side, even knowing where it is, I cannot see it.

There must be some sort of warning signal that is given out that this area is off limits to other birds, though, because there formerly were any number of itinerant birds of all sizes that would come and go from there during the day. Particularly, there was a mockingbird that would come in the late afternoon every day and go through his entire repertoire for us while we took “Tea on the Verandah”.

The nest has been continuously occupied now for about two weeks, and every morning and every afternoon I have made it a point to go out to talk to the bird to get her accustomed to us. I haven’t felt comfortable with getting close enough to take a picture until now. My first attempt, from much further away, resulted in the camera focusing on the lattice work around the deck, while blurring the bird completely. I got brave and got a bit closer this morning, and had limited success. She doesn’t usually have her mouth open like that; she usually just sits quietly and stares at me when we have our morning and afternoon chats, but today she opened her beak. No noise – just open.

I hope we are lucky enough to see the cheepers when they are hatched! ;->

16 Responses to Roadrunner in Her Nest