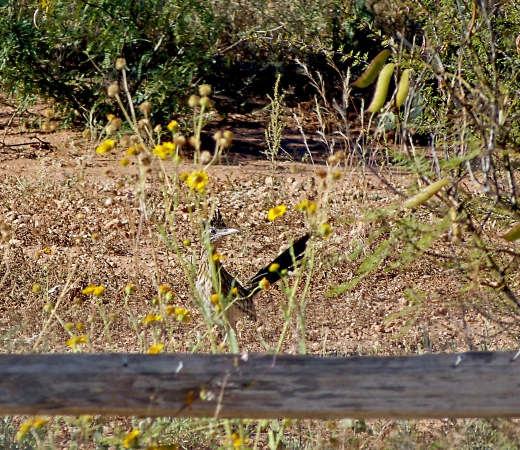 The last week or so has brought out the baby birds flitting in and out of the pyracantha bush. I don’t know if they were hatched in there, or just look on it as a nursery. I recognize the curved-bill thrashers, the woodpeckers, the finches, cactus wrens, and the mockingbirds. Like all animal babies, these guys are having a blast on the back deck. There are three glass tables out there, and they chase each other around on them, “hiding” from one another. They also climb up underneath the deck chairs to scoop out any stray gnats that may be hiding in the creases and pivot points. Then back onto the railing for some screeching. Would love to know what they are saying to each other. They do make a lot of racket, so I guess they are having fun.

About three times a week, I manage to see the roadrunner, but his speed in running down his breakfast is far faster than my ability to properly focus my camera. He was flitting around – back and forth – in the open space a couple of days ago, I presume chasing a lizard. He moved on smartly down the alley, nearly out of my sight. I zoomed out my lens and braced myself on the railing in an attempt to capture his antics.

My camera card showed me a lot of roadrunner blur, and this one Yellow Spotted Roadrunner! Perhaps a newly-discovered variation!