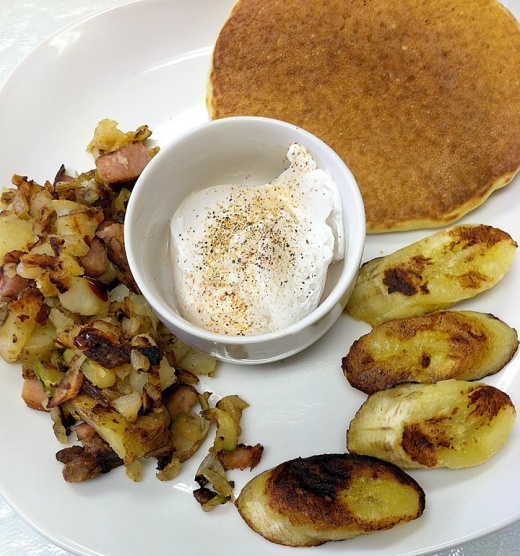 I was out of strawberries and pineapple, so this brunch looks kind of bland with no bits of the bright colors that I favor for my photographs. BUT – today’s Sunday brunch was definitely not short on flavor.

I made stuffed peppers last night for dinner in my Nesco six-quart roaster. Since there were only three peppers, there was plenty of room for four potatoes. We each ate one last night, so there were two left for brunch today.

I sautéed onion, some leftover cooked Mexican grey squash, bits of ham, and bits of Italian sausage in some bacon fat, and then cut up the leftover potatoes into very small cubes and added them, cooking it all until it was quite dry and crispy.

As I was moving some fresh bananas out of my way, and noticing that they were still a bit green, the little thought balloon blossomed over my head, and it said “Bananas Foster”.

I’ve had “the real thing” only once, and that was at Brennan’s in New Orleans in the 70’s, but I have read many a recipe for them, and have made them a time or two – many years ago. As I recalled, they were way sweeter than was pleasant, so I just browned these a bit in some ghee, with no butter and brown sugar “sauce” to go over them.

The pancakes went “nekkid” today (no blueberries), and the duck eggs were poached as usual, but the potatoes were a huge hit. The bananas were a nice change, and good because I didn’t have any colorful fruit to garnish with, but probably not something I would bother with often.