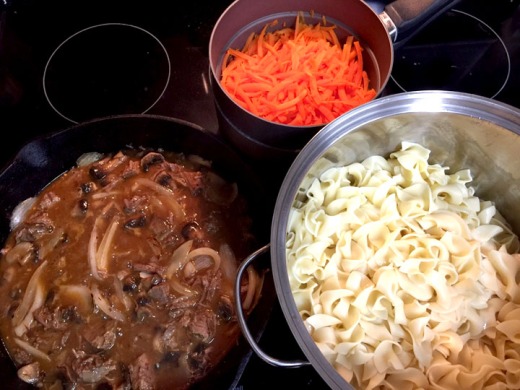 I just wrote up a recipe and method for Beef Stroganoff for a friend, so will take advantage of this, and revise it a bit and enter it here as a blog post.

I had a big batch of roast beef left over from a few nights ago, so had the basics in hand.  I sautéed some onions and mushrooms and put in some of the meat and the broth that had collected in the pressure cooker from the roast.  I sprinkled in a fair amount of paprika, too, but not necessary.  The smoked paprika that I am so fond of can be sprinkled on top at table.

I slightly thickened the gravy with flour shaken in a jar with some water.  I did NOT put the sour cream into the dish at this point.  I know you’re supposed to, but I have found that we like it better to add it in when it is on our plate and just stir it around a bit.  Advantages?  Each person gets to decide how much sour cream is “the right amount”, and two other, much better, reasons.

1)  It doesn’t make a potential for burning in the pan and sticking.  (I use cast iron!)

2)  Assuming you have leftovers from this (and we usually do), the sour cream isn’t there to possibly curdle upon reheating.

So, if you are NOT using cast iron, and don’t intend to have any left over, you can just go ahead and stir in whatever amount of sour cream that you think is right for you.  Or just don’t use any sour cream at all; as you can see below, it is delicious as is. And if there is any left over, you can add a bit of BBQ sauce and serve over buns for a second round.  Don’t put in a lot of BBQ sauce though, as that overpowers the flavor of this kind of meat.  Just enough to know that there is BBQ flavor there.  If you aren’t going to go the sour cream or BBQ route, try a little rosemary or tarragon in the meat mixture.  Or – by adding some potatoes, (more carrots, if you ate them all in the first round) and celery, you can have a more traditional Beef Stew meal.  So from one roast, you can actually do all four of those variations – five, if you count the two different herb additions.  A good deal from having cooked just one big roast.

When they are on sale, I get a couple of huge round or chuck roasts and cook them both in the pressure cooker.  This one was $7. something, and will make about five or six meat meals.  If you are bigger meat eaters than we are, then maybe three meals, but still a really good deal.  They are on sale often enough to make it worthwhile to wait.

The rest of the meal was a cakewalk.  I just shredded some carrots (7 medium ones) in my food processor and steamed them for just a few minutes.  I like them shredded because they cook quickly, and somehow seem sweeter, but you can just peel and cut them into about 1/4 to 1/2” wide slices.  Hold the knife at an angle and cut down and away from you, and you will get niftily-shaped slices.  More fun that just straight down cuts.  You’ve probably seen them sliced like that in Chinese restaurants.

The noodles are just plain egg noodles boiled in water and drained.  Sometimes I butter them at this point, and sprinkle in poppy seeds, but don’t bother when the “topping” is going to be something as strong as the Stroganoff.  If you don’t pour the Stroganoff over the noodles, you can easily put the left over noodles into a plastic bag in the refrigerator for later.

Tip:  When you put any kind of pasta/noodle stuff into a plastic bag for later, push as much air as you can out of the bag with your hands, and then tie it up tight with a twist tie.  Yes, they will stick together, but getting the air out makes them last a lot longer.  When you reheat them, just steam gently with some water in the bottom container, or just dump them into a pot of boiling water for just a trice. They will unstick, heat very quickly, and be absolutely perfect – good as freshly done.