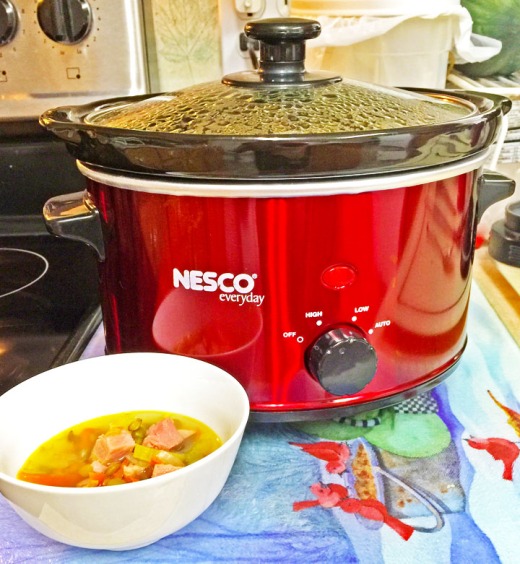 I have been using a six-cup Rival slow cooker for a very long time – decades!  It does a wonderful job on small amounts of food, but it has only one control – the plug.  Either it is plugged into the wall, and is ON, or unplugged from the wall, and it is OFF.

So when I saw this beauty with HIGH – LOW – and AUTO (which really means KEEP WARM), I swung into action.

Today was the first time I used it.  I made split pea and lentil soup with ham and chicken bone broth.  The other ingredients were onion, celery, and carrots.  To make this as easily done as possible, I put the split peas and lentils into the Nissan-Thermos vacuum bottle to “cook” for a few hours this morning, so when it came time to make the soup, I just sautéed up the veggies, brought the broth to a boil, heated the ham in the boiling broth, and then put the whole of it into the Nesco slow cooker to let the flavors mingle for a few hours.

I like to make sure everything is at the boiling point before entrusting the cooking to a low-wattage appliance, so that the food is taken to, and kept at, a safe temperature during the time it is in there.  Expecting a slow cooker to bring food to a safe temperature quickly is not going to happen, but it will maintain it at, and just below, the simmer for a very long while.  This develops a wonderfully rich flavor.

It was so flavorful in fact, that I didn’t add another thing to it while it was cooking.  DH added Tabasco sauce when we were eating it at lunch time, but I thought it needed nothing more.  Happily there is enough left for another lunch.