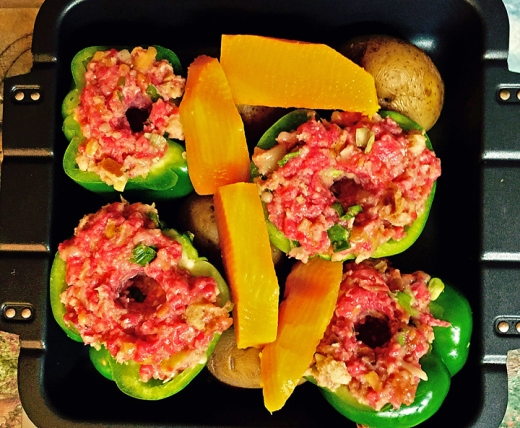 This was a very easy-to-do dinner that had wonderful flavor and nutrition. This Cuisinart Oven Central machine has really made life a lot simpler.  The best part is that clean up is practically non-existent.  Nothing seems to stick to the pan, and it is a breeze to swish out, dry, and put it away immediately.

This iteration provided the main dish for two meals, with the potatoes and veggie for this meal.  The stuffed peppers cooked fairly quickly because of the little indentation poked in each one.  This somehow really speeds up the cooking.  The potatoes and squash were already cooked and were from another meal – yay leftovers!

I didn’t time the cooking process, but instead relied on my meat thermometer to let me know when the temperature inside was safe to eat.  I think it took less than half an hour, and the temperature was well over the 160-degree mark as is recommended for safe eating of ground beef.

For the second dinner using the other two peppers, I added a hearty slice of pepper Jack cheese, and half a piece of cooked bacon to each pepper serving, and added another round of those nice, golden new potatoes, a hearty slice of sweet potato, and a melange of Mexican grey squash and sweet onion.

Just as delicious as the first time.  It just didn’t take as long to reheat them as it did to bake them the first time.  I did the squash in a pan on the stove in about the same amount of time as it took to reheat the peppers and potatoes in the Cuisinart Oven Central.  Again, an easy-serve, easy-cleanup meal.

6 Responses to Stuffed Green Peppers in the Cuisinart Oven Central