The Tale of Tippy Tail 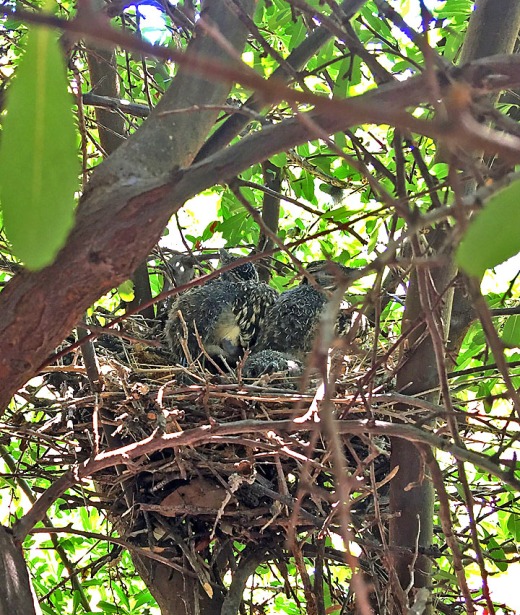 Teenagers!  Once they get out of the nest, it’s hard to keep track of them.  This is the last portrait of all three baby roadrunners before they started abandoning their home for the great outdoors.  The third one is in the front center – all hunkered down with his beak pointed straight at the camera.

I didn’t take a lot of pictures of them – mostly because I couldn’t get to them without really invading their sanctity.  The parents seemed to tolerate our presence on the deck, but I didn’t want to overly concern them and have them abandon the nest at some point during the gestation, raising, and fledging.

The littlest one was, of course, the last to leave the nest.  His inexperience with the world gave him quite a disadvantage to getting out into the open area to join his family and learn the finer points of feeding himself.  His ability to hop up onto the fence, and thence to the other side to freedom, was just more than he could immediately muster.  The springs in his legs were not sufficiently developed for such activity.  It certainly wasn’t needed in the nest.  He needed to only open his mouth, and a tasty morsel was popped into it.

We were quite amazed at the amount and variety of food that was hauled in there by the parents.  We saw everything from crickets, to lizards, to snakes, to a baby bird – probably a quail, as they are everywhere around here, and they nest on the ground.  The size of the food seemed incongruous with the size of the babies’ mouths, but we did not see any sign of adult regurgitation of these foods.  Whatever they ate must have totally agreed with their needs, because they seemed to grow up right before our very eyes.

It’s been a couple of weeks now since they all abandoned the nest.  And our littlest one has a slight deformity of his tail, presumably from the overcrowding in the nest.  The very end of his tail tips up a bit, so we can tell which of the roadrunners he is.

We quite often see the whole family out there hunting about, but have not seen more than four at one time.  We saw Fledge #1 leave, and then conquer the fence.  And we saw #3 (with the tippy tail) do the same.  But we did not see #2 leave the nest.  So we are not certain if we just don’t ever see all five at once, or if somehow one was lost in the transition. It may be that we are seeing all three babies, but just one parent at a time.

The first two were robust, and Tippy Tail was the runt, and we expected maybe he wouldn’t make it, yet he persisted.  His tail seems to be flattening out a bit every day, so soon I won’t be able to tell which of our friends is which, but for now, it is fun to watch them grow up.  His persistence is still evident in the massive amount of fluttering he does when he sees another member of his family.

Yesterday afternoon he was out all alone in our yard, pecking at the fence for bugs.  He was feeling pretty grown up, when the quail who were marching on the water pond became aware of his presence, and scurried away in a noisy flurry.  But moments later, two of the other roadrunners appeared, and Tippy Tail turned into a quivering mass of shaking feather ruffling in an attempt to be fed.  The larger birds were having none of it as he went from one to the next in his quest for a free meal.

We’re not certain what they are up to, but there have been many repeat visits to the nest in the hedge.  A time or two, there was nest material in their beaks.  So we’re not sure if the original parents are starting a new brood (seems unlikely), or if the offspring are just practicing the Art of the Nest.

We are trying to recall the exact timing from our last batch three or four years ago, but at some point soon after total fledging, two additional eggs appeared in the nest, but were never tended.  Eventually other birds removed them for their own use as sustenance.

It’s so great to have Mother Nature provide us with such quality programming!

12 Responses to The Tale of Tippy Tail