IT’S A LONG ONE TODAY! 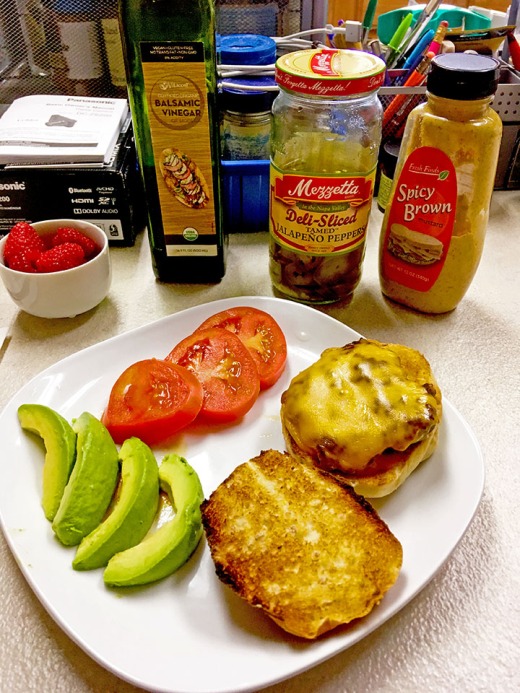 For most meals I do a little calculation in my head to see what the approximate cost is for the food that is on the plate, and accompaniments.  Over the last few years, the common number has increased from about a dollar to about a dollar and fifty cents, with more specialty dinners rising to two to three dollars on occasion.  Fortunately, leftovers contribute to lesser cost meals, so it pretty much all evens out.

These photos are of our lunch and dinner from one day last week, and it was interesting that they added up to just about three dollars.  As you might imagine, fast food from a drive-thru establishment holds no interest for us, so I don’t know for certain what the comparative cost might be, but I suspect that a burger, and perhaps a drink, would amount to more than three dollars, and that would provide skimpy nutrition, and for only one meal.

I’m not sure what made the above lunch so special, but NOLA Boy waxed poetically about it for about an hour after having consumed it.  And then he went to take his nap with a smile on his face!

I don’t set out to be miserly with our food budget; it just seems that to prepare nutritious meals produces deliciousness, with low cost as a “side effect”.

Having started cooking when I was about ten, this endeavour comes easily to me, but lately I have found that the plethora of appliances, and other helpers, that are available has really changed food preparation for the better.

Starting about in the mid-50’s, I watched (and helped) my mother produce fabulous meals with her two “helpers” – a Mixmaster and a pressure cooker.  That was about it for specialty items.

I cooked under her tutelage for years, and then started my own household in 1962.  A hard-working husband, and then a baby boy, required me to learn a lot more about how to cook entire meals, and be not just a sous chef.  Baby boys tend to grow up to be voracious eaters, and they have friends who found our home to be an attractive hang out!  I learned about quantity cooking – and then schooled said boy child in taking over the cooking for his friends.  He still does much of the cooking in his household using mostly his BBQ unit!

Over the subsequent years, I acquired a microwave oven, a stand mixer, a bread machine, slow cookers, a Nesco roaster, a rice cooker, and various smaller specialty electrical units, and cooking became a passion, as well as a necessity.

I learned to make my own yogurt and buttermilk, churn butter in the mixer to put on the sourdough bread, and cook just about everything from scratch.  It seemed invigorating to be able to produce such luscious foods.  In fairness, I did the butter only once – much easier to purchase it neatly packaged in sticks – but it was fun to give it a whirl.

Not long ago, I ran across my recipe for the sourdough bread and home-churned butter, with the notation on the bottom of the typed (on a typewriter!) page:  “All good sourdough bread deserves homemade butter”.  I remember typing that page on that typewriter from my tiny office in a house that we moved out of in 1976!

During those twenty or so child-rearing years, we were young and very active, so my repertoire included a lot of desserts.  Now?  Not so much.  Sugary items have lost their appeal, so we do not feel deprived, but I remember the many pretty items that graced our table nearly every night.

The last few years have become a cakewalk (pardon the pun) to cook for two elderly small eaters.  The biggest improvement is the result of having acquired the three- and six-quart InstantPots.  I still use my Nesco roaster, the toaster, and the Cuisinart Oven Central, but my set of Calphalon pots and pans, a stove-top steamer, the bread maker, and those marvelous InstantPots do most of the work now.  These fewer appliances provide me the ability to prepare the nutritious food that we know and love.

It really is a cakewalk to sidestep the frozen food and other pre-prepared foods in the aisles of the grocery store.  I am always amazed at the small amount of edible food that is available in a package that is purported to be sufficient for an actual meal; the packaging is more substantial than the nutritional value.

I understand that my available time to produce food is probably more generous than others, but the process seems so simple these days.  It is easy to cook more than is necessary for any given meal, which then provides an ingredient or two for another, slightly varied, menu for the next day, or the day after.

With modern storage containers and methods to reheat foods so that they taste absolutely first rate, I find that one good hour-long session of cooking can provide one or two components for a future meal or two.  This cuts down considerably on the time it takes to put together an attractive and healthy meal.  If freezer space is available, all the better to have one’s own pre-prepared foods on hand.

Here is dinner on the day of the above lunch.  It was equally as delicious, and as thrifty.  I urge everyone to allot some time to cooking food from scratch, to help to break the “fast food” cycle that is so prevalent these days.

You definitely will not be sorry.  ;-> 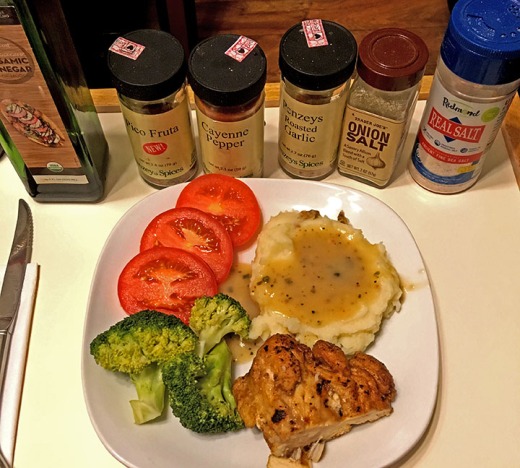