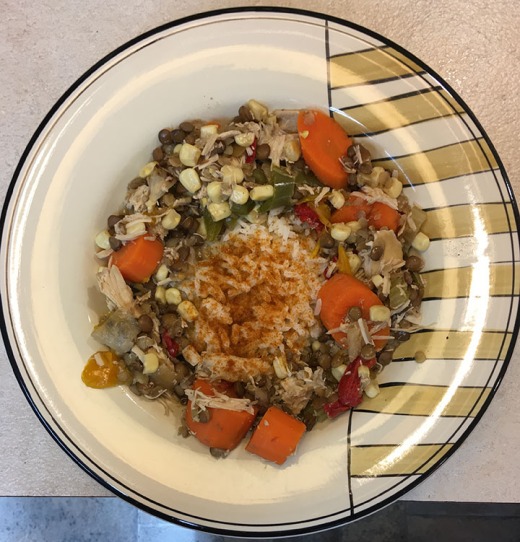 Forty some years ago, NOLA Boy did a trek to Gokyo Lake in Nepal, via India.  He picked up a liking for Indian food on this trip.  This was before our time together, and I have zip interest in Indian Foods – but am learning.

I saw an attractive recipe for Mulligatawny Soup, which he had often spoken of, so gave it a try.  The results are pictured above.  I didn’t have any coconut milk, so that basic ingredient is missing.  To me, this was like the meat and vegetables from the filling for chicken pot pie, only with lentils, instead of being creamy.

I probably made it too thick; more like a stew than a soup.  The results were tasty, but not particularly attractive.

A couple of days later, I was on my own for lunch, so I took out a couple of cups of it and made a cream sauce to add to it.  I don’t have a clue what Mulligatawny is supposed to taste like, but this was pretty good like this.  It was okay before adding the creaminess to it, but this was better.

We have plenty of varieties of Penzey’s Spices to complement just about any cuisine, so I dragged out Tandoori, Vindaloo, and their proprietary “Curry”, which was a mix of about ten different spices.  That’s Tandoori that you see on my bowl above.  It is relatively mild.  I ended up adding just a smidge of Curry to mine, but not a lot.  The Vindaloo?  Well, it is HOT!  So I didn’t mess with that at all.

I can see maybe putting the remaining soup/filling into a casserole dish and plopping a layer of flaky puff pastry over it to create a Chicken Pot Pie type of dish.  The filling that is left does not have rice in it, so I won’t be putting starch on starch.

Maybe I’ll even try to make the pastry from scratch!  ;->  I’ve done it before, and it is time consumptive, but right now, I have plenty of time to do experiments like this.