Multiple Myeloma – the good, the bad, and the ugly

As some of you know, my husband, Gary, has been battling Multiple Myeloma, which is a non-curable cancer of the blood and bone marrow, since 2006. The disease is not immediately fatal, but what they call “manageable”, so we had to come off the road to manage it.

He had an autologous stem cell transplant in December of 2007, and has been slowly recovering all these years. We have always been of the mind that good food, good rest, and exercise are the building blocks of continued life. Along with plenty of foot and leg massages and endorphin infusions via full-body hugs, this regimen has worked well.

So far, so good – until . . . well, here is his story in his own words, using his wry sense of humor, as written to a close friend. He tells it better than I ever could.

Hopefully the techniques and medications that he describes below will keep this fabulous person and brilliant mind with us for many years to come. He is the light of my life! ;->

Here is the story in his own words:

Well, I guess you’ve heard that I am officially on the ‘relapsed list’ now. That’s the standard progression for this disease; it can’t be cured. But, every few years they seem to improve the overall survival time, so perhaps the process will have a nice long tail — though, I’d guess that an asymptotic approach to a normal life expectancy is, for me, not in the cards.

Judie has probably filled you in on some of the details, but I’ll recap them here so that you’re completely up to date.

About (maybe) three months ago I began to think that my distance vision was degrading just a little — not unusual for someone my age. Over the course of perhaps a month, the situation progressed to the point that I could discern that the degradation was in fact a slight diplopia for objects in the middle to far distance; again not too uncommon. I went to the optometrist and got a prescription for “prism” lenses that seemed to cure the problem. (It’s probably worth noting that all during this time, I felt absolutely top notch, seemed to have huge amounts of energy, and so was not even thinking in terms of a relapse scenario.) But in about a month, the situation deteriorated significantly and the diplopia began to encompass near field objects as well. At this point, I also noticed that my right eye was “toeing inward” toward my nose. Naturally, I was quite alarmed and contacted an ophthalmologist immediately. He diagnosed the physical cause of the problem as impairment of the sixth cranial nerve, which was preventing the abduction of the right eye. We made an appointment to have an MRI, but the soonest that they could get me in was ten days from the office visit.

Fortunately, I insisted that the results be forwarded to my oncologist as well as the ophthalmologist, and we got the results on 19 November (last Tuesday). It turned out that there is a 4.3+ cm^3 mass in the sphenoid sinus located behind the nasopharyngeal area. This is a bony chamber situated above the pons and below the pituitary gland (as nearly as I can tell from wading through Grey’s — what a cretinous tome!). The presentation is consistent with a plasmacytoma — the type of soft, bone eating tumor associated with multiple myeloma. It is apparently exerting a downward pressure on the clivus bone at the base of the chamber, which is I think, directly above the pons — so this would allow it to place pressure on the cranial nerves which exit the pons — and induce “cranial nerve palsy”, which is the cause of the diplopia. There is apparently no projection of the tumor mass into the brain tissue at this point — these types of tumors aren’t interested in eating brains as I understand it !

My oncologist (Dr. Madani at Arizona Oncology — a really great guy!), got me in to see Dr. Nabhani, a radiation oncologist at Cochise Oncology. Within about one day they had me scheduled to start radiation, which began on Thursday. I’ll get about 1.8 Gray of relatively low energy gamma radiation (a six Mev electron beam impacting a Nickel [?] target) in ten fractions over the next two weeks. (I’ve had two already.) The fractionation helps to improve the outcome, since cancer cells are more strongly affected by the radiation and tend to die off, while healthy cells don’t seem to sustain as much damage per dose and tend to recover. So by applying the radiation in small doses over time, the proportion of healthy cells is increased more rapidly and with less total radiation, than it would be otherwise.

Enclosed below are a couple of interesting shots of the apparatus. The first is an overview of me poised in front of the Varian accelerator. (I think the machine that they’re using is this one.)

“On The Altar of Technology” 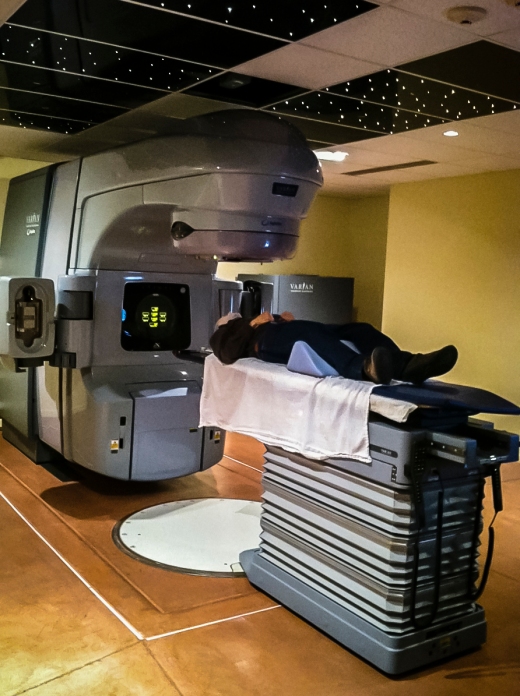 The next shows the stereotactic targeting beams and the head restraint:

“Gary Gets a Brain Job”, or “Beam Me Anywhere But Here Scotty!”

With this setup, they can target the beam center to within 1 mm inside the skull — the beam itself has about a 5 mm spread. As a result of these tolerances, the head must be fairly well immobilized during treatment. That’s the function of the “Silence of the Lambs” face mask thingy, which is a spongy thermoplastic that they mold to exactly fit the contours of your face. The mesh and its frame are bolted to the gurney and it holds you (eyes shut) firmly in place during the fifteen or so minutes that each procedure requires. During that time, the head of the machine is rotated around your body so that the beam pivots on the tumor mass, delivering the full dose to that tissue, but minimizing the dose delivered to the surrounding areas. By using various beam shaping and energy management techniques they can further minimize collateral damage.

In some orientations of the accelerator head, the beam will pass through the visual cortex at the rear of the brain — not for long periods, perhaps ten to fifteen seconds. When this happens, it’s as though someone has turned on a flashlight which is shining across your visual field; you can actually ‘see’ a continuous sustained light, not the sparkling scintillations that I had imagined would be the case.

Fortunately, plasmacytomas respond well to lower doses of radiation and the prognosis is that this treatment will destroy the tumor handily. As to whether or not I’ll regain proper functioning of my eye — well, nobody knows at this point, but generally nerve damage is slow to resolve. In any event, the vision in each eye by itself is fine, its just that the binocular integration is shot for now. (Interestingly, with both eyes open, I see double and walk into walls; with the right eye shut, the vestibular system is still apparently taking cues from the tension in the positioning muscles of the right orb, and so I tend to suffer a slight vertigo — and walk into walls! Heads, they win; tails, you lose!)

Of course, oncologists don’t like to put all their eggs in one basket, and so they have started me on a course of chemotherapy as well. The cocktail du jour this time around is Revlimid (a thalidomide analog), Velcade (bortezomib, a proteasome inhibitor), Dexamethasone (immunosuppressant, glucocorticoid steroid). These are pretty nasty things and can cause a variety of undesirable side effects — one of which is death by pulmonary embolism. This regimen is designed to address the systemic risk posed by my damaged immune system, which is the source of the tumors in the first place.

Finally, in order to map out the actual situation, I will receive a whole-body PET scan next Tuesday, 26 Nov. This will pin point any currently active lesions in other areas of my body.

So by the end of this adventure, I should pretty well glow in the dark. Of course, I’m reminded of the old Monty Python skit:

Doctor: “Well, it will have to come out then!”

Sometimes a chuckle is the best medicine.

32 Responses to Multiple Myeloma – the good, the bad, and the ugly