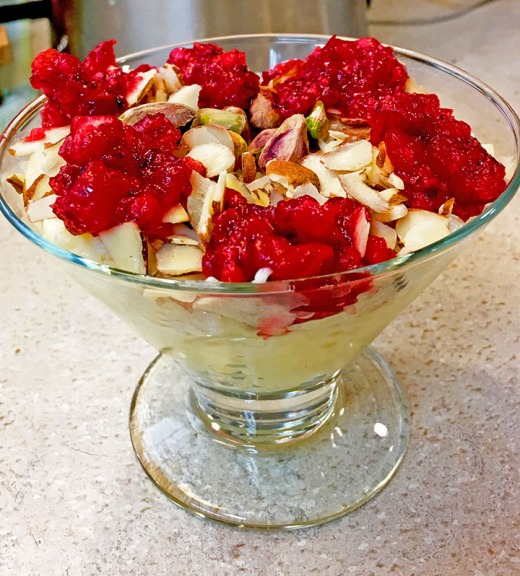 He was just getting started as Doc on “Gunsmoke” when Milburn Stone appeared in the 1954 move “The Siege at Red River”, as did the pre-Paladin (“Have Gun, Will Travel”) Richard Boone. They co-starred with the popular and versatile Big Guy of the times, Van Johnson.

Why am I thrilling you with this bit of trivia?

Some months ago, I got in my head that my four flavors of pudding needed some variety, so I bought a package of tapioca. The directions seemed simple enough, i.e. soak the little beads for half an hour, and then make pudding as usual, only put eggs in it.

Truly, I don’t know why I waited so long. It was surely easy enough to do, and the result was somehow more satisfying than just regulation pudding.

Having dutifully followed the recipe (except for adding amoretto flavoring, reducing the amount of sugar, and [not] whipping the egg whites separately), I ended up with a lovely pudding. But it looked lonely with only those little soft pearls for variety.

It tasted great, but was still too sweet, and was “beige bland”.

So . . . to complement the amaretto flavor, I added a circle of pistachio nuts in the center, and surrounded them with sliced almonds. It still looked kind of “vanilla”, so I added the cranberry relish.

You may recall my blog post from ages ago about “der ohrwurm” (ear worm). Well, the little theme song from that movie is an old Civil War song, but I could remember only bits and pieces of the movie. The word “tapioca” I knew for sure played a big part in the song, but the only other bit of information that was still in my brain was “Gatling gun”, and that it took place during the Civil War.  Every time I came in contact with the word “tapioca”, der ohrwurm would come into play, so something had to be done.

As usual, I was totally blown away that with the entry of “tapioca” and “Gatling gun” into a Google search box, I was able to pinpoint the source to fill in the blanks in my brain by finding out all of the above information about that movie.

The wonderment that I feel about the capabilities of the internet must be akin to those thoughts by folks in times past who were, at last, able to have information and entertainment contained in books that they could hold in their very hands.

I never cease to be amazed that I can sit here in my kitchen in my fuzzy pajamas and “speak” to people in far-flung locations around the world.

If I am not alone in this wonderment, could I entreat those who have the time to tell me where you are reading this post from? I can see on my stats page which countries have been noted, but not which reader is from which country.